Parting with the old hospital bed…

Not every couple’s first shared bed is a hospital bed

Years ago, when my partner, with whom I have shared my life for the past 28 years, found himself in graduate school in New Hampshire, he had to find his way in the world with whatever could fit into his old Volvo sedan. Needless to say, a bed was not one of the items that would fit well in the trip from Ithaca, NY to Durham, NH. Finding an ad for a room available and then finding that the room came with an old hospital bed left behind by a previous renter solved two problems at once.

The mystery of how an old iron, electronic hospital bed frame complete with motor, control box and hand held control ended up in some random appartment in Durham, New Hampshire remains a lost tale. By the next fall, Michael found housing with a University friend in a small house scenically located on Bear Lake and the hospital bed accompanied the move.

That same fall, I arrived in New Hampshire in a small U-haul truck, driven by my father and I, transporting a white corvair convertible inside the truck with all my belongings. The first question might be, why did my father actually buy me Ralph Nader’s “Death Trap”? The next question begged is why did my dad, the insurance man, purposely decide to evade the rules and put the car inside the truck instead of towing it behind?

Firstly, the corvair might have been an attempt to make up for giving my Camaro away to my sister while I studied abroad. The next question is why did my father in his right mind buy his third child a Camaro at all? Fortunately for me, the Camero was actually bought for my mother, being the sporty car available in 1973 for their mid-life crisis. Unfortunately, for my parents, I turned 16 shortly after that and constantly begged to drive the new car. My father’s belief that newer cars were safer cars to drive somehow allowed me to get to drive the new hot rod.

At this point, my children are rolling their eyes, knowing that none of their grandfather’s rules carried through to their teen years. It is possible that my mother did not appreciate the quick response of the Camero, since my father soon bought her a replacement car; the Granada, a car famous for its lack of pickup. Suffering the handicap of having a speedster as a first car has made it a little challenging to learn how to drive slow.

Moving up to NH

Transporting the car inside the U-haul, while it violated rules that my father actually insured companies against; apparently was the lesser of the two evils to my dad, he hated the risk of towing the vehicle more. After two long days of looking for housing, we finally found a room to rent in a house rented by female students. I soon settled into my life in graduate school and shared an office with all the other grad students in the Botany Dept at UNH.

Finding the love of my life

One of my fellow office mates was the handsome Michael Wisniewski and his presence had not gone unnoticed by me. I was the typical industrious grad student and came in on weekends to work. While I don’t recall our first conversation, I do recall the one that changed everything.

For Thanksgiving, another male grad student and I joined Michael at his house for a vegetarian version of the holiday. Michael prepared all the food, was the perfect host and then entertained us all evening singing songs on his guitar that he’d written for all his past girlfriends. I fell for the man hook, line and sinker.

When the other grad student dropped me off at home later that night, I made sure to define our relationship as just friends so he didn’t get the wrong idea about us, as I knew my heart was now pledged elsewhere.

The next day was a beautiful fall day and I was back in the research lab plugging away at science. That afternoon, Michael walks in and asks me, “would you like to go for a hike on Parker Mountain with me today?” Caught off guard, determined to get my work done and pleading temporary insanity, I politely answered, “I would love to, but I have to get this work done today.” Acting like it was no big deal, Michael told me he was 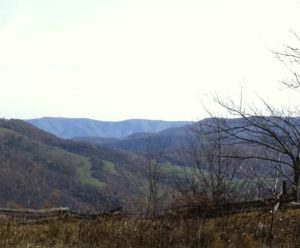 meeting up with a friend in town for a few minutes before he headed out, should I change my mind.

It only took a few seconds after he left for me to realize that I was making a huge mistake staying behind to work in the lab and I grabbed my purse and ran out of the building. I literally ran the two blocks into town and found Michael just where he said he’d be.

He seemed very glad that I’d changed my mind and we soon drove to the foot of Parker Mountain. We had a very nice hike up and down the mountain, with a few classic ‘stumbles upon the rocks’ that required me being “caught before I fell” by my fellow hiker. It is still hard to really remember if those were faked by me or were indeed real stumbles.

Regardless, it proved safer for me to hike holding my friend’s hand and so it began. Once the hike was over, my astute fellow hiker suggested I join him for dinner at his house. I do recall the wine, the good food and our first night spent together in the single bed, it must have been weeks later that I discovered we were sleeping on an old hospital bed.

Within months of being together, we found a cute little apartment in a Victorian duplex in Dover, NH. In order to pull off living together, we would need to pay rent at three separate places for a month and come up with a damage deposit for the new location. Unfortunately for my parents, they were the only ones who could help us pull this off. Fortunately for me, I wasn’t bothered by their response, “we will give you the money to do this, but we do not approve of your living together.” My response was something in the neighborhood of, “that’s cool, thank you for the money.”

Ah, to be young again and to be blind to your parent’s views of how the world should work. I know the hospital bed made it to the new digs and then the rest of the details are a blur.

Time to let the past go

Here it is 28 years later and the hospital bed has lived in our shed for at least ten years. Now that we learned how to take things to the dump last week, we are ready to take our second load this weekend, with the focus being metal junk in our life and yard.

Out with the old, in with the new.

Collecting Garbage with my Dad

One Less Person in my Inner Circle
Scroll to top